Polystictus versicolor (L.) Ft. Boiled for food by Dakota Indians.
[Note: Trametes versicolor is the current name for this mushroom.] 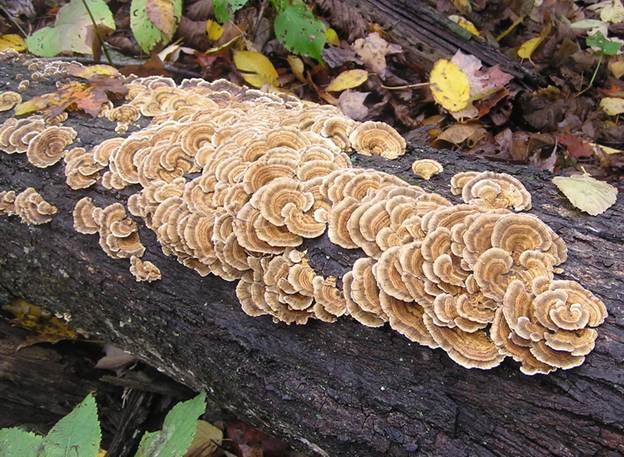 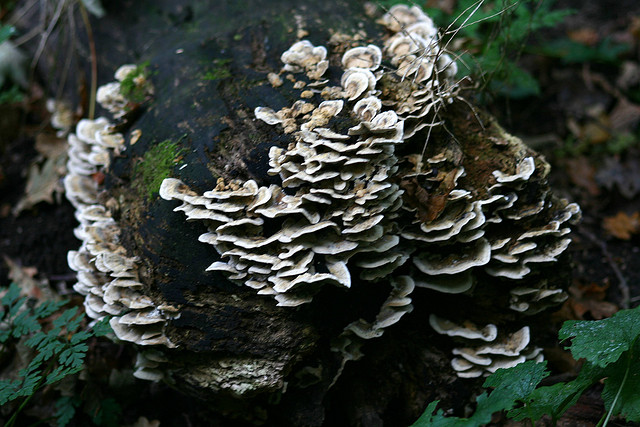 The Tree Bound (a story of Iktomi)
It was a clear summer day. The blue sky dropped low over the green edge of the prairie. A large yellow sun hung directly overhead. The birdsong filled the summer space between earth and sky with sweet music. Again and again a yellow-breasted bird sang–Koda Ni Lakota! Koda Ni Lakota! which was, “Friend, you’re a Lakota! Friend, you’re a Lakota!” Maybe the bird sang this to the warrior with the magic arrow, for there across the plain he strode. He was handsome in his paint and feathers, proud with his great buckskin quiver on his back and a long bow in his hand. He was traveling far to an eastern camp.

There over the village hovered a large red bird threatening the safety of the people. Every morning this terrible red bird rose from a high bluff and spread his gigantic wings, soaring over the camp circle. The people, terror-stricken, would run screaming into their lodges, covering their heads with their blankets, trembling with fear. No one dared to venture out until the red bird had disappeared beyond the west, where the blue and green meet.

The chieftain of the tribe had tried to find among his warriors a powerful marksman who could send a death arrow to the man-hungry bird, but without success. Finally, he proclaimed a new reward. Any warrior who brought the dreaded red bird down with an arrow in its breast would have his choice of the chieftain’s two beautiful daughters. So the men of the village, young and old,  heroes and cowards, trimmed new arrows for the contest. At dawn they waited, silent as ghosts, wrapped in robes with chosen bow and arrow. Some cunning old warriors left the group and crouched low upon the open ground. But all eyes were fixed on the top of the high bluff.

When the morning sun peeped over the eastern horizon, the red bird walked out upon the edge of the cliff. He ruffled his neck and flapped his strong wings together. Then he dived into the air. He winged his way over the camp, over the men with their strong bows and arrows! In an instant the long bows were bent. Strong straight arrows sped upward to the blue sky, but none could find their target. Off to the west the red bird flew. A sudden clamor of voices broke the stillness of the dawn. The women talked excitedly about the strength of the birds feathers, while the warriors sulked.

That evening, a group of hunters sat around the fire talking of a strange young man whom they spied while out on a deer hunt beyond the bluffs. They saw the stranger taking aim at a herd of buffalo. The arrow sprang from the bow and darted into the skull of the first buffalo. But unlike other arrows it pierced the head of the creature and continued into the next buffalo head. One by one the buffalo fell upon the grass. The young man stood by, counting on his fingers the buffalo as they dropped to the ground. When the last one fell, he ran and picked up his magic arrow and wiped it carefully on the grass and slipped it back into his long fringed quiver.

When the hunter’s tale of the stranger’s arrow reached the ears of the chieftain, his face brightened with a smile. He sent his horsemen to learn his birth, his name, and his deeds. “If he is the avenger with the magic arrow who came up from the earth out of a clot of buffalo blood, tell him to come. Let him kill the red bird and win one of my beautiful daughters,” he said to his messengers, for the old story of the badger’s man-son was known all over the prairie.

After four days and nights the braves returned. “He is coming,” they said. “We have seen him. He is straight and tall and handsome with large black eyes. He paints his cheeks with bright red, and wears lines of red over his temples like our men of honored rank. He carries on his back a long fringed quiver in which he keeps his magic arrow. His bow is long and strong. He is coming now to kill the big red bird.”

Now it chanced that Iktomi overheard the people talking about the coming stranger. At once he was filled with a new desire. “If only I had the magic arrow, I would kill the red eagle and win the chieftain’s daughter for a wife,” said he in his heart. Beneath the tree in front of his teepee he sat on the ground with his chin between his drawn-up knees. His eyes scanned the wide plain. He was watching for the avenger. All of a sudden he raised an open palm to his brow and peered far to the west. The summer sun hung bright in the middle of a cloudless sky. There across the green prairie was a man walking bareheaded toward the east.

And when the bird with the yellow breast sang loud again–Koda Ni Lakota! Friend, you’re a Lakota! Iktomi put his hand over his mouth as he threw his head far backward, laughing at both the bird and man. “He is your friend, but his arrow will kill one of your kind! He is a Lakota, but soon he’ll grow into the bark on this tree! Ha! ha! ha!” he laughed again. The young avenger walked with swaying strides nearer and nearer. Iktomi heard the swish! swish! of the stranger’s feet through the tall grass.

He was passing now beyond the tree, when Iktomi called out: “Hau, hau, my friend! I see you are dressed in handsome deerskins and have red paint on your cheeks. Are you going to some feast or dance, may I ask?” Seeing the young man only smiled Iktomi went on: “I have not had a mouthful of food this day. Have pity on me, young brave, and shoot this yellow bird for me!”  The young avenger, always ready to help those in distress, sent an arrow upward and the bird fell. In the next branch it was caught between the forked prongs.

“My friend, climb the tree and get the bird. I cannot climb so high. I would get dizzy and fall,” pleaded Iktomi.

The avenger began to scale the tree, when Iktomi cried to him: “My friend, your beaded buckskins may be torn by the branches. Leave them safe upon the grass till you are down again.”  “You are right,” replied the young man, quickly slipping off his long fringed quiver and placed it on the ground to climb the tree unhindered. Soon near the top he took the bird.

“My friend, toss to me your arrow that I may have the honor of wiping it clean on soft deerskin!” exclaimed Iktomi.

“Hau!” said the brave, and threw the bird and arrow to the ground. At once Iktomi seized the arrow. Rubbing it first on the grass and then on a piece of deerskin, he muttered something. The young man, stepping downward from limb to limb, hearing the low muttering, said: “Iktomi, I cannot hear what you say!” “Oh, my friend, I was only talking of your big heart.” Again stooping over the arrow Iktomi continued his repetition of charm words. “Grow fast, grow fast to the bark of the tree,” he whispered. Still the young man moved slowly downward. Suddenly dropping the arrow and standing erect, Iktomi said aloud: “Grow fast to the bark of the tree!”

Before the brave could leap from the tree he became tight-grown to the bark.

“Ah! ha!” laughed Iktomi. “I have the magic arrow! I have the beaded buckskins of the great avenger!” Hooting and dancing beneath the tree, he said: “I shall kill the red bird; I shall wed the chieftain’s beautiful daughter!”

“Oh, Iktomi, set me free!” begged the tree-bound Lakota brave. But Iktomi’s ears were like the fungus on a tree; he did not hear with them. Wearing the handsome buckskins and carrying proudly the magic arrow in his right hand, he started off eastward. Imitating the swaying strides of the avenger.

“Oh, set me free! I am glued to the tree like its own bark! Cut me loose!” moaned the prisoner.

A young woman, carrying a bundle of tightly bound willow sticks, passed near by the lonely teepee. She heard the wailing man’s voice. She paused to listen to the sad words. Looking around she saw nowhere a human creature. “It may be a spirit,” she thought. “Oh! cut me loose! set me free! Iktomi has tricked me! He has made me bark of his tree!” cried the voice again.

The young woman dropped her pack of firewood to the ground. With her stone axe she hurried to the tree. There before her clung a young brave close to the tree. Too shy for words, yet too kind-hearted to leave the stranger tree-bound, she cut loose the whole bark. Like an open jacket she drew it to the ground. With it came the young man also. Free once more, he started away. Looking backward, a few paces from the young woman, he waved his hand, upward and downward, before her face. This was a sign of gratitude used when words failed to convey strong emotion.

When the bewildered woman reached her dwelling, she mounted a pony and rode swiftly across the rolling land to the east, to the chieftain troubled by the red bird to tell him her story.