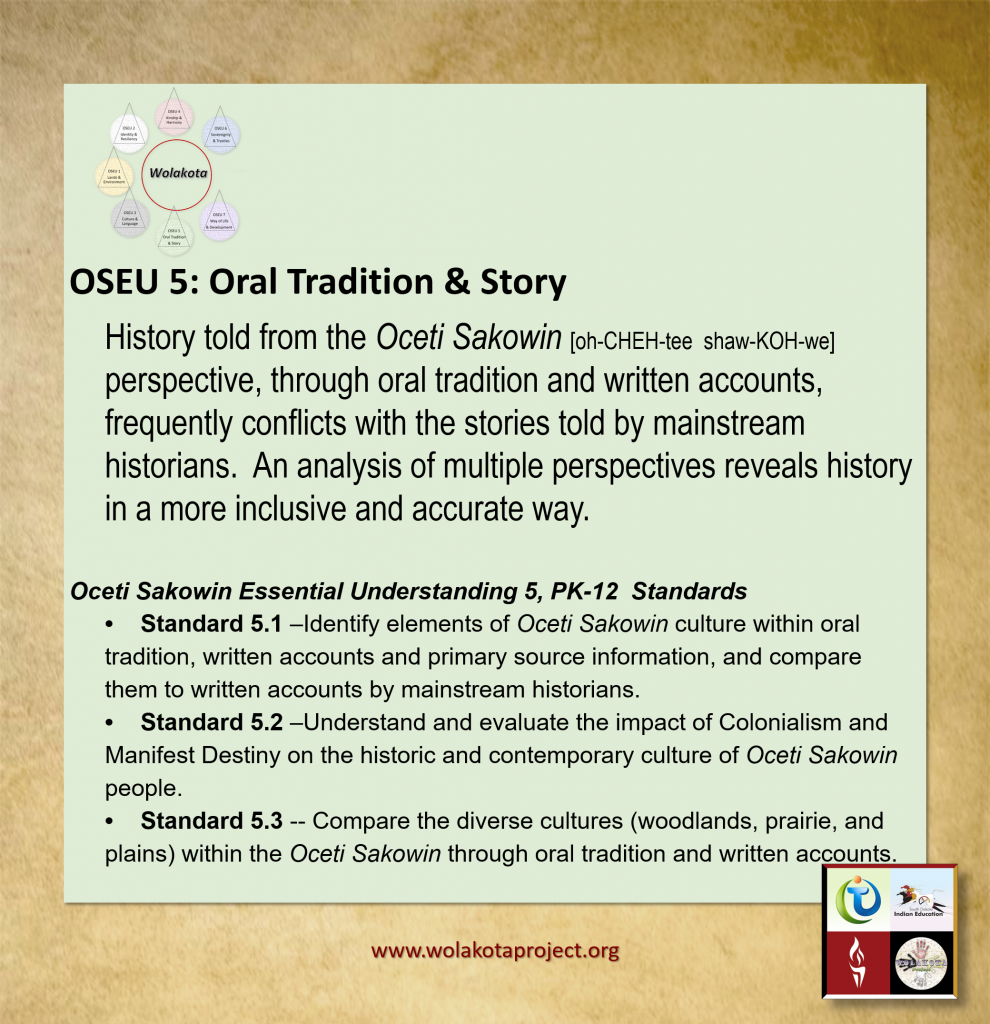 Being Able to Listen with Stephanie Charging Eagle

The Story of Iktome & the Ducks with Janet Claymore Ross

Who Gets to Tell the Story? with Joseph Marshall III

Why Isn’t This Taught? with Whitney Rencountre

One major concern of American Indians is that in written history, notes, and early notes, observations and first impressions of the Tribal people were interpreted, judged, and visualized into the European concept or Western way of thinking. When these observations and first impressions did not fit into western culture and concept of how things should be, we were judged as being uncivilized.     (A. White Hat 2012)

From the time of first contact and into today’s society there have been misrepresentations found in literature, movies, and other forms of popular culture that reinforce cultural misunderstandings. To add to the misconceptions, those in positions to write history determine what and how Oceti Sakowin history is written.

Oral tradition encounters resistance from scholars because it has been labeled as being unverifiable. Historians often label and misrepresent oral tradition as “just stories” and subjective information. This viewpoint has allowed valuable information from the indigenous people to be lost. Oral tradition is a way that knowledge is transmitted from one generation to the next. Oral tradition is a way to transmit history, literature, law, culture and traditions of the people. Oral tradition is the first form of education; it shapes and structures thought patterns, expression, social relations, and values shaping culture and behaviors. Just as important, it is a way to retell memories and histories by those who experienced historical eras and events. It is a way of passing down wisdom learned from mistakes and successes of elders.

Storytelling is the most studied of Native oral tradition. Oral tradition includes creation stories, tribal historical accounts, legends, and stories that teach proper behavior and lessons of life. Though traditionally, Oceti Sakowin languages were purely oral, they did employ a form of writing in cave/wall etchings, shirt wearer shirt designs and in their annual Winter Counts. A Winter Count is a history of a people that contained the most important event of the year. That important event was depicted by a symbol or a pictograph which told the entire story of that event. There are many ways in which oral tradition can be used in the classroom through oral interviews, review of literature, archives, books, articles, journals and reports. Museum visits, drawings, photos and maps may be collected and studied. Education will be much better as a result of the commitment to meaningful engagement. Studies of oral tradition can raise consciousness, resolve differences, create compassion, and empower.   (L. Whirlwind Soldier 2012)