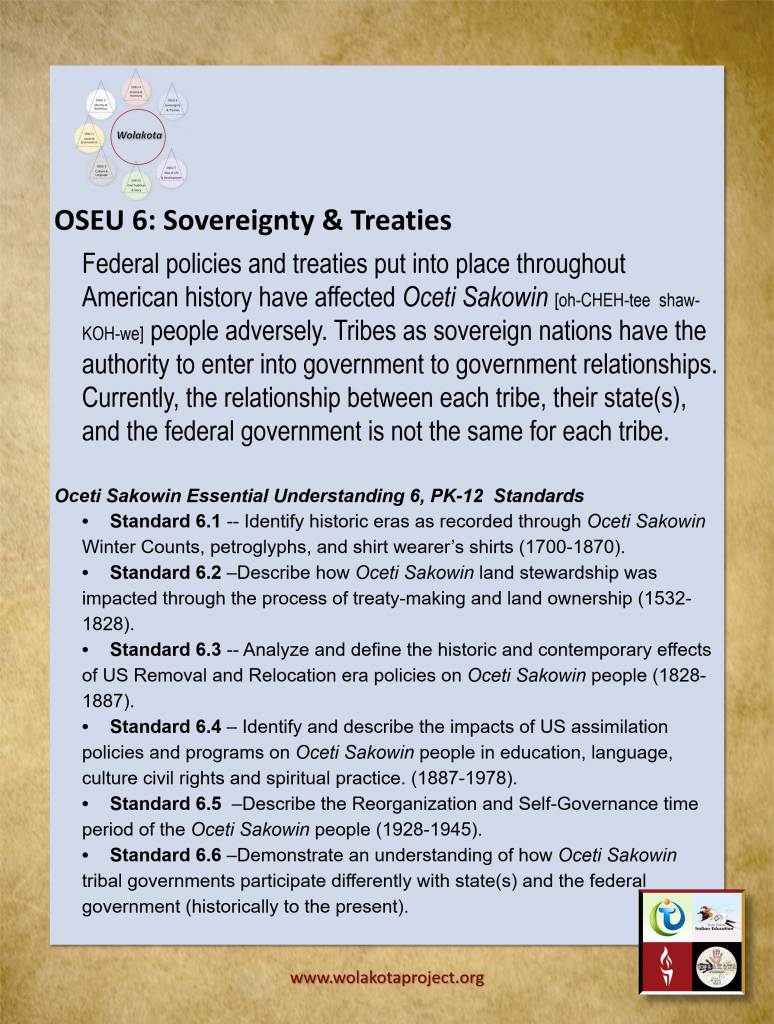 The Impact of Forced Treaties with Stephanie Charging Eagle

Indian Law “Before & After” with Joseph Marshall III

Working Together with Whitney Rencountre

The unique way each Oceti Sakowin Band retains its tribal sovereignty are powerful elements of survival, how it evolved to its present form, and where it will eventually evolve. The current and historical facts about this topic are supported by the incredible amount of information available. Moreover, oral tradition has come into its own by responding to the historical facts from an Oceti Sakowin viewpoint.  This would include winter counts, recordings and videos of elders and others sharing stories and information, and written accounts of history using primary documents.

There are different perspectives on tribal sovereignty. For example, one perspective focuses on the idea that tribes are not truly sovereign because they lack the model of sovereignty, especially when compared to the United States model of sovereignty. This is clearly based on the interpretation of Supreme Court Chief Marshall’s idea of the “domestic dependent nations” concept. (V. Douville).

One of the key events in the Age of Discovery is the legal groundwork created by Emmerich Vattel to address the ownership of tribal land. This will have a lasting impact of how the United States viewed treaties, land acquisition, and the right of discovery concept.

The key link is the case of Rosebud Sioux vs. Kneip and its potential to emerge in the future with jurisdictional implications, impacting issues such as courts, seatbelts and water rights. There are also other issues such as the Cobell lawsuit involving the trust status of land ownership and Bureau of Indian Affairs (BIA) mismanagement of land. Trust land monopolized by the BIA and Federal Government raises some key issues of Vattel’s interpretation of ownership of tribal lands.

Differing perceptions exist concerning the idea that the land issues were settled in the past by the simplest method, “Might Makes Right.”  On the other hand, the attitude by some tribal members is that since the government dealt from a “weak” position–having been defeated at the “Battle of One Hundred Slain” (1866)—the US simply “signed” treaties like the 1868 Fort Laramie Treaty. After the US government wrote the treaty, some Lakota chiefs and leaders used thumbprints or oral consent using a pipe. Sometimes soldiers or government agents signed for the Lakota person.  The treaty ceded a large land base from the Lakota and Dakota. In the end, the tribes lost out because in signing the 1868 Fort Laramie Treaty, authored by the Federal Government through the military branch, the Oceti Sakowin unknowingly made major concessions because gold was discovered in the Black Hills.

The treaty-making period lasted from 1805 to 1871, according to the Federal Government, or from 1805 to 1934, according to the tribal elders of the Oceti Sakowin. Treaties are still in effect when land claims are discussed. The impacts of the treaties are still evident in the continued funding of each tribal nation today. Benefits to tribes from treaties should not be connected to tax or welfare, but rather as a replacement for a lifestyle that was lost by coercion.  Treaties should be viewed as applied in the U.S. Constitution and the interpretation of Supreme Court Chief Justice Marshall.

Some non-tribal members have a negative perception of the usage of tax dollars for funding tribal needs. Taxation is an unpopular subject. This is countered by a positive feedback by tribal perceptions and historians who are using facts to show that treaties are legitimate and that the federal government should be held accountable for reneging on treaty obligations.

Federal policies can be divided into three parts: congressional acts, judicial decisions based on interpretations of the laws, and executive orders.  Moreover, pre-federal policies should be included because they are regarded as formative, including the Marshall trilogy, the creation of the BIA, as well as various policies. One such policy is the long-range mission of the United States to transform the tribal members into citizens of the United States starting with treaties of friendship to get the tribes to recognize United States sovereignty over them. The policy also included taking land by war whenever necessary, placing tribes on reservations, breaking up reservations into individual holdings, and acculturating/assimilating tribal members.

When the tribal perspective is included in government policies, better discussions can only lead to positive outcomes based on critical thinking. Most of the negativity comes from the paternalistic attitude of the BIA, an agency that manages tribal trust lands. The evolution of the BIA shows how this organization still has a stranglehold on the Oceti Sakowin members and other tribal groups, until the modern times when this grip has somewhat loosened.

The Oceti Sakowin has survived the gamut of federal policies that are designed to destroy the traditional base of knowledge and practice.    The tribes have survived the dark past envisioned by a man who knew what was best for Native people, “Kill the Indian and save the man.” (Captain Richard H. Pratt 1892).

Today, our endeavor is to save the Oceti Sakowin history and culture and destroy the stereotypes. (V. Douville 2012)