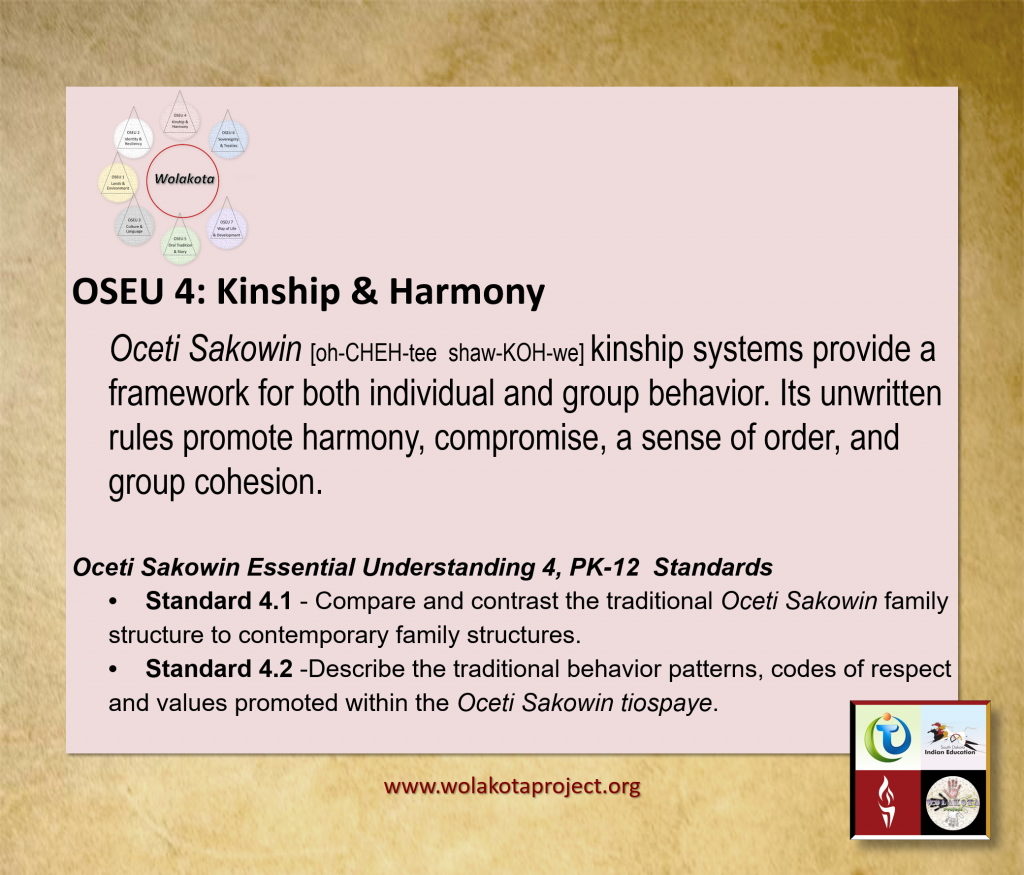 Family is Always There with Lowell Amiotte

Kinship and Etiquette with Gladys Hawk

The Story of Commitment with Duane Hollow Horn Bear

Cousins and Relatives with Donald Montileaux

Showing Rather Than Telling with Whitney Rencountre

I Owe A Lot to My Grandmother with Janelle Williams

The Seven Council Fires maintained an organized government with each Council Fire autonomous, yet with an allegiance that unites the seven tribes in a cohesive relationship. These open, egalitarian, classless and cooperative tribes formed for the collective good, for nation building, preserving identity, ethnic solidarity and cohesiveness. Tribal life includes a philosophy of life, history, cultural and social rules, rituals, ceremonies, traditions, social organization and democratic government.

The Seven Council Fire’s social structure has significant social and kinship distinctions that are divided into four cooperative units. A tiwahe, which is the nuclear family, includes a mother, father, children and grandparents. The tiospaye which is the extended family, consists of three or four generations includes uncles, aunts, and cousins, children of brothers, sisters and cousins. The tiospaye is very similar to a community with many relatives and other members who are invited to join them. The oyate is the entire tribal group including those in a tiwahe, tiospaye, ospaye and oyate. We wotakuye is the extended families, the blood relatives. The hunka kagagapi is the adoption or making of relatives. Tiospaye is the identifying of spiritual clanship. Oyanke means Dakota community and oyate is the tribal identity.

To the Seven Council Fires, kinship is one of the most important concepts. This strong close-knit kinship system is filled with respect and cooperation that binds tribal members together as a collective unit, and is theoretically all-inclusive. This is central as it is the foundation for a sound development of a stable society. This social structure has significant social distinctions among individuals that establish a strong cultural and ethnic identity.

It is believed that it takes a village to raise a child. Adults in the tiospaye have the social responsibility for the upbringing of all village children. Children are still taught the importance of sibling relationships, responsibilities and role behaviors within the family and within the tribe. Positive behaviors are modeled to create and encourage a favorable character and to demonstrate core values that foster an emotional climate for healthy child development. The child is expected to imitate the positive behaviors of their relatives. One must always be a good relative.

The close kinship system cultivates specialized interaction between children and adults. Each individual has a valued role in the family that is instilled from birth. The rules imposed by kinship were many. The rules of etiquette include using kinship terms when speaking to others. It is considered rude to plunge into conversation without using the polite term of kinship. The kinship system continuously gives children lessons and examples of good behavior, independence, problem solving, family and tribal responsibility, courage, generosity, fortitude and wisdom.

This solid foundation creates high expectations, a strong family and tribal bond, unity and identity. It is a philosophy of “we,” cohesion of interconnectedness and not a belief that an individual’s needs are more important than the needs of the whole. This social structure ensures that every person contributes to the moral and physical well-being of the tribe.

The Oceti Sakowin kinship system not only creates a nation with a strong moral structure, but creates a philosophy linking kinship components to spiritual beliefs that embraces the world around them. The concept of ‘Mitakuye Oyasin’ teaches respect for the earth and all life forms and to become stewards of the land.

The people of the Seven Council Fires fitted every detail of existence together in the village for the people, for all living things, and respect for the environment through kinship. (L.Whirlwind Soldier 2012)