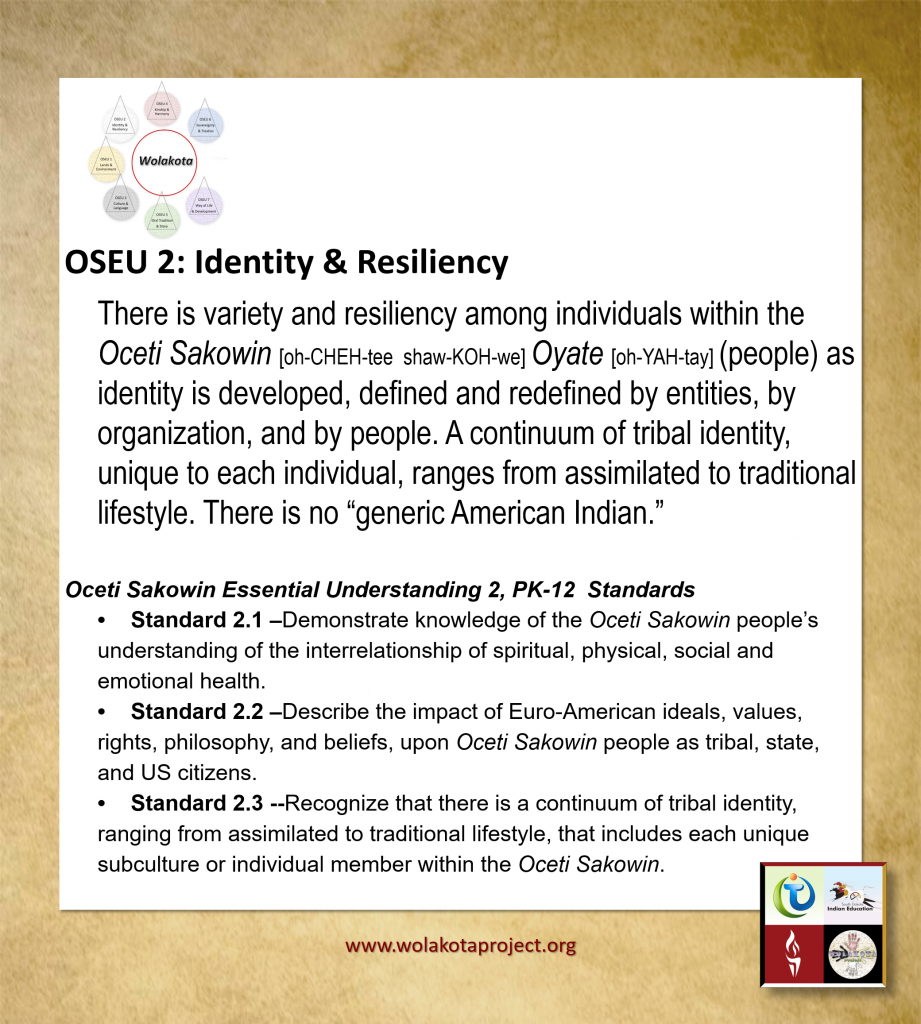 Wo I ste Olowan wan: Song and Translation by Earl Bullhead

We’re Not All the Same with Lowell Amiotte

Pride in Where I Come From with Victor Douville NEW!

The Story of Time with Duane Hollow Horn Bear

The Importance of the Sun Dance with Drs. Johnson & Eastman

There is No Generic Indian with Lydia Whirlwind Soldier NEW!

This Is Who We Are with Janelle Williams

Environment has a tremendous influence on Oceti Sakowin lifestyles. There is a distinct difference between the tribes who live in the woodland areas and those who live on the plains. Much like all other cultural groups in American society, individual differences within tribal groups vary. Variations of individual differences within any cultural group are influenced by assimilation into society at large, language other than the Native language, upbringing, personal relationships, life experiences, and socioeconomics. However, assimilation efforts by the United States government and religious organizations as early as 1790 contributed to drastic changes in tribal society and to individual differences.

Americanization policies were based on the idea that when indigenous people learned (European-American) customs and values they would be able to merge tribal traditions with European-American culture and peacefully join the majority society. After the end of the Indian Wars, in the late 19th and early 20th centuries, the government outlawed the practice of Native American traditional religious (spiritual) ceremonies. It established boarding schools and children were taken from their homes and families and attendance in boarding schools was mandatory. In these schools the children were forced to speak only English, study standard subjects, attend church, and leave their traditions behind.  (Adams, David Wallace 1995)

These mandated policies created forced change for individuals and individual Oceti Sakowin families. The boarding school system contributed greatly to the erosion of tribal culture that reverberates into this century, causing many social dysfunctions and in some cases disillusion in American society. After 1890 the tribes continued to resist forced assimilation passively, by simply refusing to forfeit their cultures. The spiritual ceremonies went underground and were held in secrecy. Oceti Sakowin language was still spoken in the home when children returned from boarding school. However, not all families resisted the changes; some willingly accepted the assimilation policies of the government and religious organizations.

Despite individual differences that do exist within tribal groups, Oceti Sakowin people strongly identify with their tribal group through enrollment into the tribe, common origin, history, culture, and language.

If the general public assumes that there is a “generic American Indian,” then that assumption carries with it society’s visible injustice of stereotyping, racism, and other forms of prejudice and discrimination.  In South Dakota, it is most respectful to say “Oceti Sakowin,” or, depending on the dialect group from which they come, to say “Dakota,” “Nakota,” and “Lakota” people.

As a country of diverse cultures we have cultural knowledge that we can share positively and constructively with each other. By honoring and respecting each culture’s perspectives, ideas, differences, and similarities we can create a better, stronger, and more peaceful American society.   (L.Whirlwind Soldier 2012)